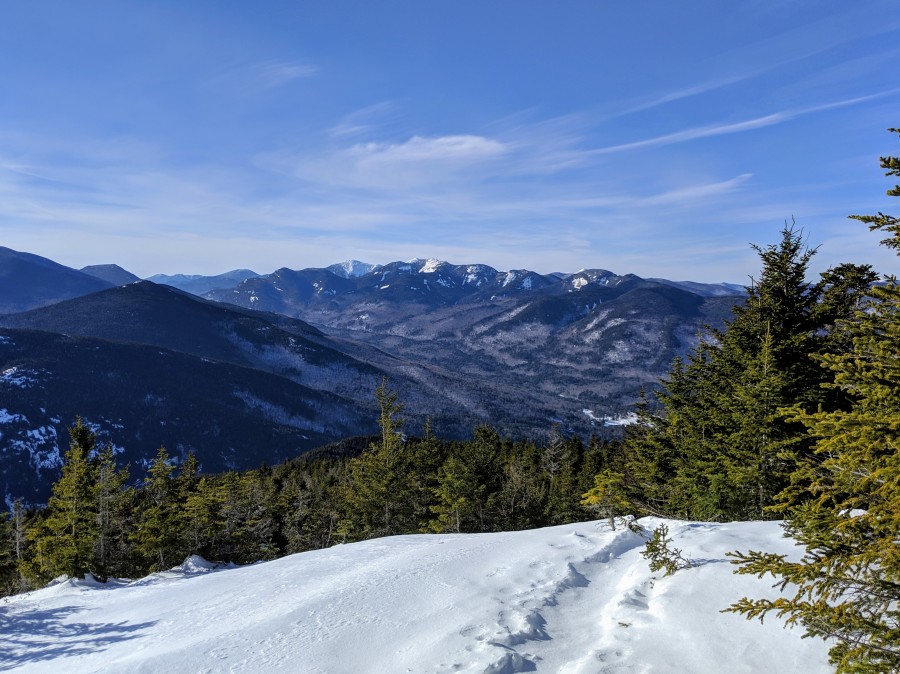 As I’ve gotten more into hiking and mountaineering, my inner video gamer is drawn to arbitrarily defined sets of objectives. I recently read Ed Viesturs’ book No Shortcuts to the Top about climbing all 14 mountains in the world with peaks more than 8,000 meters above sea level (a feat I have no plans to accomplish), and my wife Tori and I just finished hiking all five of Vermont’s 4,000-foot mountains in a year — more on that soon.

What seems to be one of the most organized sets out there is the Adirondack High Peaks. There are 46 of them, picked out in the early 1900s as all of the mountains in the Adirondacks above 4,000 feet. (Four of them were remeasured later and discovered to be below 4,000 feet, but they remain part of the set.)

The first people to hike the 46 as a set were brothers Robert and George Marshall with their friend Herbert Clark. According to Adirondack.net, the trio’s efforts inspired the congregation of the Grace Methodist Church in Troy, NY, which formed the organization that has become the ADK 46ers. That group has catalogued every person to hike the 46 high peaks since Clark and the Marshall brothers began their quest in 1918. There are now more than 10,870 certified ADK 46ers.

As if it were appealing specifically to my gamer mind, the organization sends a completion patch to everyone who hikes all 46, and an extra bonus patch for completing them all during winter.

I plan to get both patches, but I haven’t set a timeline and I have no problem hiking some of them in the summer and then returning in the winter. One of my favorite parts about these challenges is that they’re personal, and everyone gets something different out of their time in the mountains. My way isn’t the best way, it’s just the way I’m doing it.

On December 19, 2018, not knowing my start year was exactly a century after the pioneering trio’s, I set out with Lana to summit my first two high peaks: Giant Mountain (12th highest, 4,627 feet) and Rocky Peak Ridge (20th highest, 4,420 feet). Here’s my trip report:

My online research suggested this hike was among the “easier” hikes in the Adirondack High Peaks (my research also revealed that there aren’t any easy ones), so I thought it would be a good way to start given that it’s winter conditions at this point and I had no experience in the Adirondacks before. (Because we did the hike before winter solstice, it does not count toward the winter 46er patch.)

I took Lana, our 10-month-old black lab mix, in booties and a coat. We started off from the apartment at 5:15 a.m. in order to make the 6:30 ferry from Charlotte, VT to Essex, NY. From there, it was a short drive up into Chapel Pond pass, where the trailhead is located immediately off the side of Route 73. On the other side of the road is a big rock face popular for rock and ice climbing; I’ll definitely have to go back for that.

The first couple of miles of the hike, up out of the valley, made for a very tough start to the day. I made it a mile or so without traction devices on my boots, but we eventually came upon rocky areas covered in sheets of ice. I put on my YaxTrax for the remainder of the ascent. I never put on my snowshoes, but I was very glad to have them because the icy snow crust was thin in places and a slight variation in conditions would’ve left me postholing into 3-4 feet of snow under a hard crust. It would not have been a fun journey.

It was Lana’s first hike with her red Ultra Paws booties. I got them for $7 on consignment at Outdoor Gear Exchange and wasn’t very hopeful since booties are very hard to make in a way that stays on dogs’ feet. They stayed on all day! There was a problem with ice crusting up inside the cuffs, which I had to keep clearing out – but I think I can solve that next time with some self-adhesive medical wrap.

We reached the summit of Giant Mountain after a little more than two hours, at about 9:50 a.m. (I didn’t note the exact start time, but the drive was about 2 hours so it was likely 7:15-7:30.) There were some trees up there but the summit was right at the top of a bald slide down the mountainside, so I was able to see an amazing view out over the high peaks in very clear weather.

The next part of our journey was to go along a “ridge” to Rocky Peak Ridge, a lower peak to the southeast. Up to now, I’d been hiking directly away from Route 73. Now I doubled back on my route and very soon after leaving the summit came to a trail intersection where I turned left toward Rocky Peak Ridge on a trail that parallels Route 73 a few miles away.

Given that I was traversing a saddle between the two peaks, I thought this would be the easiest part of the hike. Now that I’d reached the high point of the day, I expected most of the elevation gain to be over. I was wrong.

The “saddle” I was expecting turned out to be more of a capital-U shape, with a steep descent off Giant and an equally steep ascent to the Rocky Peak Ridge summit. That summit was neat – it was bald, so the snow on top had been blown into smooth waves by the wind. Rock carins surround the high point. The lack of trees made the view phenomenal, and it was awesome to see Giant Mountain looming nearby and know that we’d been at the top less than an hour before.

We got to the summit of Rocky Peak Ridge at about 10:45, making far better time than I’d expected to our turnaround point for the day. Part of that was due to the hard snow crust. Even with relatively weak traction devices on, I was probably moving over the ground with more ease than a summer hiker in most places. We also weren’t resting often; I had a 3-liter Camelback that I was sipping from just enough to keep the line from freezing, and I took two or three breaks of less than five minutes to recover after especially steep sections or because I found a convenient seat.

The return was smooth and mostly uneventful. In order to follow the trail back to the car, we had to traverse back most of the way to the top of Giant Mountain again. As we were coming down that slope, exhilarated of the first summit of the day and grateful to be going downhill, I didn’t think to notice exactly how steep or long the trail down the side of Giant had been. On the way back, though, it walloped me. I’d probably let my psychological guard down, thinking the hardest part was behind me because I’d completed both objectives of the day. I was wrong again. Coming up the side of Giant Mountain again after 4+ miles of steep hiking was brutal, and it seemed to go on for a lot longer than I remembered.

I took a nice break at the trail intersection, knowing it was all downhill from there. Some of that was fun and dicey. Since Lana was in her booties, she didn’t have very good purchase on the ice or harder snow crust (they almost certainly prevented badly scraped up paws though). On steep and bare sections, we would go one at a time with me either belaying from above with the retractable leash on her harness or going ahead of her and planting myself to stop her slides from getting out of control. This worked well except for once when I was going ahead of her, glissading on my butt and planting every 15-20 feet to coax Lana down to me.

Near the bottom of the slope, I dropped my heels into what I thought was a solid step of snow and weighted them. It was ice, and my legs went right back out from under me and my slide continued out of control over some smooth ice bumps. Luckily my bones avoided them and I shot past – feeling the leash go tight as I went – and into a snow berm against some trees, laughing hysterically at myself. I turned immediately to check on Lana and she promptly hit me in the face at about 20 miles an hour. I went down in hysterics again, and she walked away looking slightly embarrassed but not worse for wear.

The rest of the descent was very smooth, and in a much less icy sense. It was here that I encountered the first other parties of the day. I realized how different and serene it feels to be in the wilderness for hours and hours without any sign or sound of humans besides carins, trail markers, and the tracks I was walking over. There were birds occasionally, but mostly I was hearing the sound of my breathing and the patter of Lana’s booties on snow. Sometimes wind hummed through the branches overhead.

I understand the draw of the Adirondacks. Vermont’s wilderness is contained – areas to be preserved and protected from the constant pressure of development and civilization. I’m sure the Adirondacks are that way too, but they feel the opposite – as if by clustering 46 high peaks in such a small area, the mountains have conspired to keep us out and to stay wild. Even on a perfect, calm day with barely sub-freezing temps, I felt like a visitor there, like I had a much smaller share of the powers governing my fate.

See my AllTrails recording of the hike.